A tricky question of conservation ethics

I've often had the good luck to find discarded flint cores when field walking and have quite a collection but I've only very, very rarely seen anything that looked like it might be a hammerstone, and even then the evidence is usually ambiguous.  But this week I picked up the tool pictured and I can't see what else it could be other than some form of purpose designed hammer. 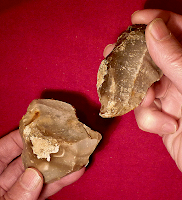 It's a good weight, easy to handle, and the point has been crushed by hundreds of small blows until blunt. I wonder if it might have been intended to be re-sharpened once it became blunt, unlike a pebble which has to be thrown away. (It's almost certainly Mesolithic, by the way.)

Here's my tricky question.  I'm naturally dying to try it out to test my theory.  I could try it on a fresh piece of flint, properly prepared.  Or - even more outrageous - I could try it on one of the discarded Mesolithic cores I've found (like the one pictured here.)  Should I, or shouldn't I?

The answer is that I'm going to duck the question entirely for the time being on practical grounds - I don't have enough skill to trust myself to use either skillfully.  Maybe one day when I've got better at it?   :-)

Is it just me?

Is it just me or has anyone else noticed that the general dumbing-down has affected museums as much as anywhere? Beautiful Victorian buildings that used to be the safe haven for thousands of fascinating and curious objects collected by indefatigable researchers and travellers now look more like a vaguely academic version of  "The X Factor" or "I'm a Celebrity - Get me out of here."

I went all the way to Hove Museum today (1-1/2 hours each way) to look at what was billed as a prehistory exhibit and one of the better collections of flint implements.  The exhibit was a single case with no information content of any substance and from which the best items had been removed for unspecified 'conservation purposes'.  Even this feeble showing was better than Portsmouth City Museum.  I visited it a few week ago to see the prehistoric exhibit only to be told that it had been temporarily replaced by an exhibit on Arthur Conan Doyle, creator of Sherlock Holmes and a son of Portsmouth.  When I asked the lady behind the counter when the prehistory exhibit would be restored, she looked vaguely bemused and told that 'there are no plans to restore it' as the Doyle exhibition was to be made permanent.

Am I really alone in finding it a little odd that three-quarters of a million years of human pre-history should be wiped out completely in favour of a popular novelist who died in 1930?

Somewhere in Britain there is someone running a course entitled something like "Museum Curatorship in The Twenty First Century".  Whoever he or she is - and if I ever get my hands on them I won't be responsible for the consequences - is addressing his students something like this.  "30 years ago, museums were boring, smelly old buildings crammed full of so much Victorian rubbish no-one could take it all in.  It was visually meaningless, and everything was explained with long, hard-to-understand text labels that were fine when everyone read books but no-one reads today because they all watch telly.  So what we need is modern, airy, spacious, brightly lit rooms that attract young people.  Less is More.  Get rid of the clutter - cherry-pick a few of your best items and put them in well-lit cases with a minimum of boring wordage and plenty of visual cues - blow up some photographs.  Get the kids involved.  Have lots of interactive stuff - try on Victorian clothes or Roman togas or Saxon armour.  Design your dream house.  Look at a fly's eye through a microscope. Take all that old crap that the well-meaning anoraks have donated to the museum and stack it in crates in the basement.  No one will ever know, and more important no one will ever care."

Well, I care.  I'd like to take all the cool, modern museum curators and stack them in the basement where no one will ever hear from them again, and replace their interactive displays with the material from the basement, including the politically incorrect stuffed birds and the butterflies and the other archetypes that tell us what to look for and where to look for it, instead of just filling an hour or two until Coronation Street comes on.
Posted by Richard Milton at 13:10 5 comments:

One of the best reference books for stone tools is that great work, Ancient Stone Implements of Great Britain, by Sir John Evans published in 1897. This brilliant Victorian book has hundreds of finely detailed drawings of implements of every kind and is invaluable to anyone wanting to identify a stone tool. Unfortunately, it has been out of print for many years and only available from antiquarian book sellers at anything from £50 to £100 or more because of the beautiful illustrations. I was very fortunate to discover a copy in Charing Cross Road twenty years ago for only a tenner.

Now I’m pleased to see that a publisher in India has reprinted it in paperback form and it’s available on Amazon for around £21 plus second hand versions. Well worth a look.