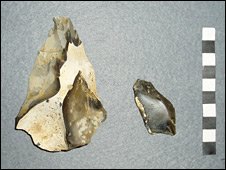 Archaeologists have found what they say is the earliest evidence of Neanderthals living in Britain. Two pieces of flint unearthed at motorway works in Dartford, Kent, have now been dated to 110,000 years ago.
The finds push back the presence of Neanderthals in Britain by 40,000 years or more, said Dr Francis Wenban-Smith, from Southampton University.
A majority of researchers believe Britain was uninhabited by humans at the time the flint tools were made.
An absence of archaeological evidence suggests people abandoned this land between 200,000 years ago (or 160,000 years ago, depending on who you ask) and 65,000 years ago.