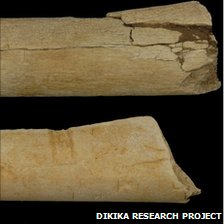 Researchers have found evidence that hominins - early human ancestors - used stone tools to cleave meat from animal bones more than 3.2 million years ago. That pushes back the earliest known tool use and meat-eating in such hominins by more than 800,000 years.
Bones found in Ethiopia show cuts from stone and indications that the bones were forcibly broken to remove marrow.  The research, in the journal Nature, challenges several notions about our ancestors' behaviour.
Previously the oldest-known use of stone tools came from the nearby Gona region of Ethiopia, dating back to about 2.5 million years ago. That suggests that it was our more direct ancestors, members of our own genus Homo, that were the first to use tools.
But the marked bones were found in the Dikika region, with their age determined by dating the nearby volcanic rock - to between 3.2 million and 3.4 million years ago.
Tests showed that the cuts, scrapes and scratches were made before the bones fossilised, and detailed analysis even showed that there were bits of stone lodged in one of the cuts.
Full story here http://www.bbc.co.uk/news/science-environment-10938453
Posted by Richard Milton at 11:00 7 comments: