The New York Times has reported a fascinating discovery on the Island of Crete. Researchers have found Acheulian culture palaeolithic hand axes which they have dated as being at least 130,000 years old.  But Crete has been an island for 5 millions years, so the toolmakers must have arrived by boat. 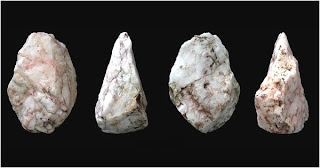 Previously, the earliest evidence for stone age marine voyages was that of the sea crossing to Australia of humans beginning aroiund 60,000 years ago, so the new finds push back to history of marine exploration by a  long stretch.