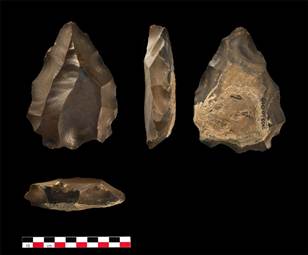 Newly discovered stone artifacts in the Arabian desert suggest humans left Africa traveling inland, not along the coasts, as long thought according to reports.
Modern humans first arose about 200,000 years ago in Africa. When and how our lineage then dispersed has long proven controversial, but geneticists have suggested this exodus started between 40,000 and 70,000 years ago. The currently accepted theory is that the exodus from Africa traced Arabia's shores, rather than passing through its now-arid interior.
However, stone artifacts at least 100,000 years old from the Arabian Desert, revealed in January 2011, hinted that modern humans might have begun our march across the globe earlier than once suspected.
﻿Read full story here: http://www.msnbc.msn.com/id/45501635/ns/technology_and_science-science/
Visit The Stone Age Tools Museum at http://www.stoneagetools.co.uk/
Posted by Richard Milton at 09:59